Last week we moved Roxie, Wendell and Mickey out of the garden to a new location with more grass to eat and root up.  They did a good job tilling the garden.  We were expecting some bad weather and I didn't want them to have to walk around in mud so it was time to move. 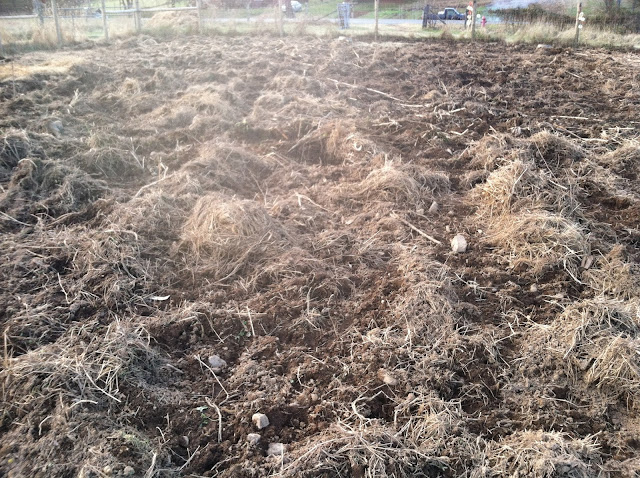 Before bed Roxie quickly picked a bunch of grass and made an even bigger nest in their trailer.  They seem pretty happy with their new accommodations. 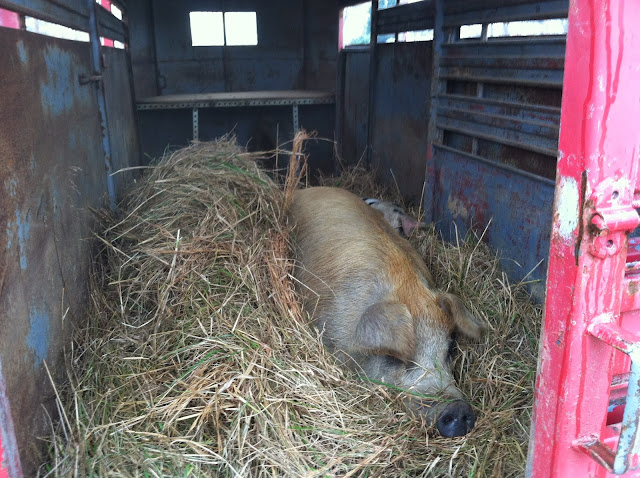 Yesterday James and I drove 1 1/2 hours to pick up two more piglets, a barrow (neutered male) and a gilt (young female).  The male is being raised for the wedding of some friends of ours.  We'll probably breed the female with our Gloucestershire Old Spot boar when they're both old enough.  These two are Large Black Hogs.  That's the name of the breed.  They're known for being good grazers like our GOS pigs.  They're pretty darn cute.  Note their long floppy ears like my other pigs.  Theirs will be way longer than Roxie's. 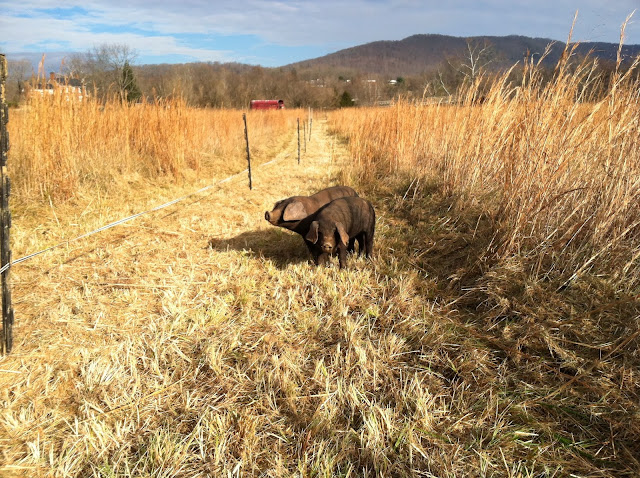 We haven't come up with a name for the girl yet.  The little boy is Mattox.  They came from the town of Appomattox so I suppose we could call her Appy or Abbie but since she will live here a long time I want to think some more on her name.

They're very busy little pigs.  I had a piece of pasture ribboned off just for them, separate from the other pigs, with their own house.  They do sleep in their house but they don't stay in their own yard.  Today they covered lots of ground.  They visit with the other pigs and then move on to other pastures.  They're already moving a lot of earth.  I've seen the girl test the electric ribbon several time and even though she's been zapped she continues to do it.  Wendell used to do this too.  Now he respects it.  Keri has always liked pigs so I'm sure she's been following them around.  They're not very tame and I can't pet them but I hope to change that.

I'm kind of afraid to write this next paragraph in case I'm jumping the gun and jinxing myself.  It has been 3 weeks and 3 days since I artificially inseminated Roxie and it doesn't appear she has come back into heat.  She's usually very consistent in her 21 day cycle.  Every day I lift her tail and look for swelling and pink.  Today she looks slightly swollen but not like when she was in heat last month.  I hope it's because she's pregnant.  I can't wait for 3 more weeks to pass so I can be sure.  Better yet, 3 months, then I'll really know for sure.

Wendell and Mickey have been practicing making babies too but I don't think they've perfected it yet.  It should be another moth or two till they're mature enough, I hope.  One litter of pigs at a time would be nice.  The guy we got the Large Blacks from had about 18 little piglets running around.  The 2 sows farrowed 2 1/2 weeks apart.

I wonder how many pigs will be roaming our field in another 5 years.