The turkeys are winning me over

It was hard getting excited about the turkey chicks' arrival since they showed up right around the time Rosie was dying.  Finally they've caught my attention.  Two days ago I was going to blog about them with a heading reading something like stupid turkeys.  I never got around to writing about them because the donkeys and bucks seemed more interesting.  Since Cooper and Jimmy's (the bucks) pen was vacated I decided to move the turkey chicks over there and get them out of the stinky shed.  I carried them in a plastic bin and set them free to run in the tall grass.  I had forgotten how turkeys make this peep peep peep all the time and this is how they call each other. They looked very cute wandering and peeping.  It took no more than 10 minutes and they discovered they could walk right through the fence and into the driveway.  Shoot!  I thought they were too big to fit through.  Actually, I hadn't really even thought about that.

They were way more adventurous than any chicken we've ever had.  They covered a lot of ground in a very short time.  I was indoors and heard the familiar peep peep peep very close to the house only to find them on the basement steps. 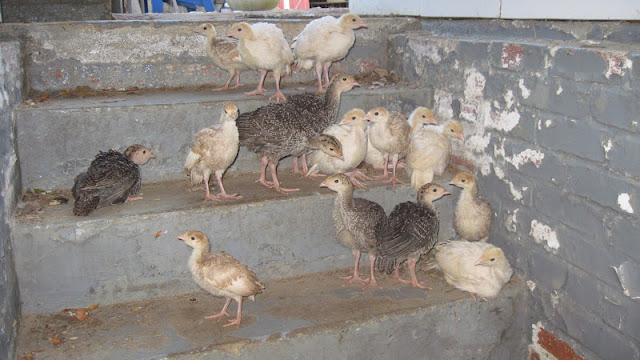 I wasn't sure if they planned to stay there or if they'd find their way back so I loaded them in a box and returned them to their new space.  It was getting dark and half of them were heading out again until I chased them back in.  How frustrating.  I was sure they were going to be eaten during the night.  They finally settled in.

Today they got lots of exercise but seemed to stay in the pasture area where most of the chickens and goats are and kept returning to their own pen.  That was nice to see.  I think they're getting the idea where they belong.  I drove the lawn mower into the pasture because the grass was so long it was hard to see the turkeys.  They came running after me, which reminded me of the turkeys 2 years ago that climbed onto the lawn mower and I had to quit cutting so I wouldn't cut them up before their time.  These little guys decided it was too noisy and ran off when they got close.  Good.  Maybe they're smarter than our other turkeys were.  The jury is still out.

There is one turkey who can't cover as much ground as the others.  I haven't named him/her because I'm afraid he might not make it to November but he's begging for one.  He's got a bad leg and has to hop on just one.  He works so hard to get around. 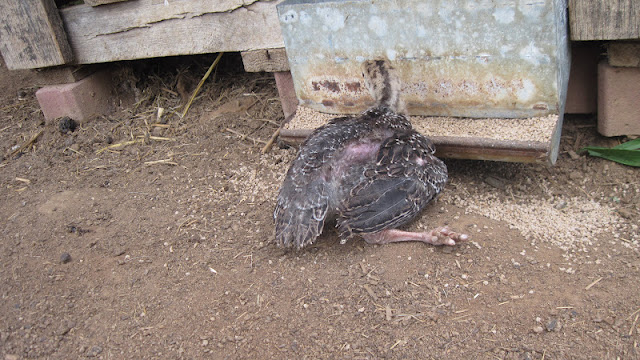 We went out to check on them tonight and they were all cuddled up in a pile in their fence where they belong.  What good turkeys.  Stay tuned. I'm sure there will be a stupid turkeys blog post eventually. 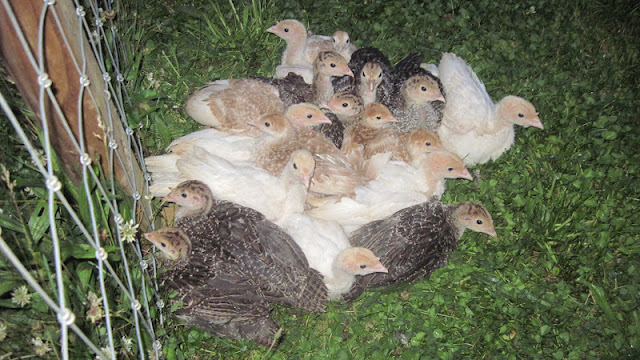