Willo is one of my beautiful mammoth donkeys.  She's the one I "ride" most.  She's the youngest of the 3 and the peppiest.  She was the first to shed her winter coat and I think she's feeling pretty good because of it.  She looks like a different girl to me.  She's almost white instead of fluffy red, white and black.   This week I introduced a few things to her.  The first was a riding crop.  You know, I didn't even spank my son (except for one time) so it was kind of a big deal for me to actually use the crop on my sweet girl.  Well, it worked.  She moved forward when I used it.  Trust me, I didn't hit her hard.  My farrier assured me the sound is worse than the sting and that my other donkeys kick her way harder than I hit her.

The second introduction was to two of my boy goats, Cooper and Jimmy.  I built the guys a shed in the field and moved them over there on the other side of the fence from the donkeys.  I gave them a day or 2 to meet through the fence and decided maybe they might like to do more than touch noses.  The boys may have been a little overwhelmed by Willo but they weren't too terribly afraid.  Jazz and Earl weren't near as interested in the goats as she was.  She decided Cooper was hers and no one else should mess with him.  If Earl or Jazz came near she kicked at them.  She kept draping her head over Cooper's back.  At the end of the video it appears Willo is in heat. Cooper is a pretty stinky buck so maybe this was the attraction.


At first I thought the boys didn't like it because sometimes they ran from her but this morning I separated them again and later I saw the boys cozied up against the fence by the donkeys.  Before I had separated them I saw Willo come out of their 8X8 five foot high shed.  It's amazing she fit in there.  I've decided to limit their togetherness for now just in case Willo gets to be too much for them.

Today James and I painted the donkeys' barn.  We got quite a bit done even with the assistance of our equine helpers. 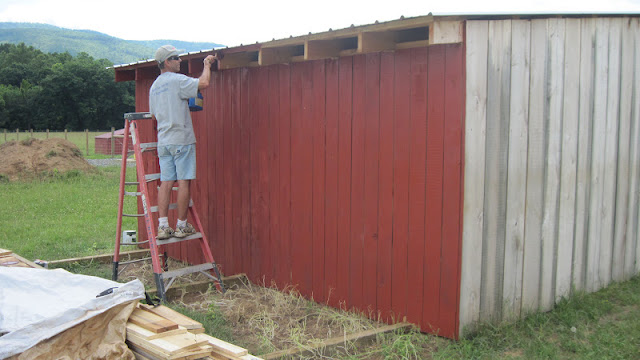 Willo and Jazz both thought red paint might make for pretty lips. 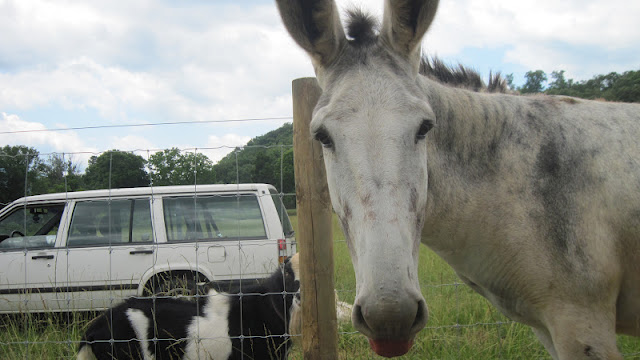 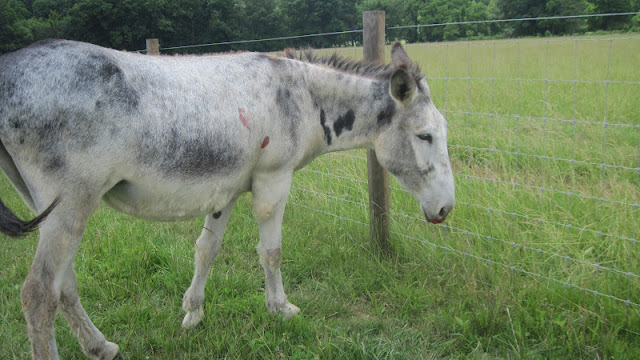 The red lips really add to her sleek new feminine look.  I don't know, would you call her a paint donkey?
Posted by kpannabecker and jpannabecker at Sunday, June 03, 2012