With the cold comes the critters

Mice have moved into my barn.  I was grossed out by the rats we were infested with a while back, that have since moved on (I hope), but these cute little field mice are rather entertaining.  As I milk they pop their heads up over the milking platform to watch, then quickly duck when they get nervous.  They run around my and the goats legs with nervous energy.  This would freak my mom out.  She once asked if I taped up the legs of my jeans so they can't run up them.  I don't.  They don't bother me and the goats ignore them unless a sudden movement startles them.  Still, they continue eating.

What does bother me is the other critter that has been coming around.  I have no video or picture of this next intruder and I don't want to see him.  There have been at least 2 mornings I've found about 1 tablespoon of yellow liquid in my dog's food bowl that smelled very strong of skunk.  I thought that the oddest thing.  Did he just back up to the bowl and use it as a commode?  Why did my dogs not attack him and why would a skunk enter a fence that has 2 giant great pyrenees in there who could rip him apart?  If that doesn't seem strange enough, the 3rd morning I found the calling card in Rex's bowl I found skunk scat in Keri's.  It appeared to have hair in it (yes, I studied it) so I think he's eating some of those adorable field mice.  I shouldn't even type this because I know it's going to come back and haunt me - Keri and Rex have never been sprayed by a skunk.  Maybe they just know better than to mess with it.  I hope so.  I haven't seen evidence of the skunk in almost a week now so I hope he's moved on.

Now I'll share a picture that will make you go awwwww.  The folks who own Mickey and Wendell sent me a text this morning to let me know Mickey had 10 piglets. I miss Mickey, Wendell and babies but I'm glad they're doing well, are loved and are living on a gorgeous pig-friendly farm.  This is her second litter with them.  I think the first time she gave them 13 piglets. 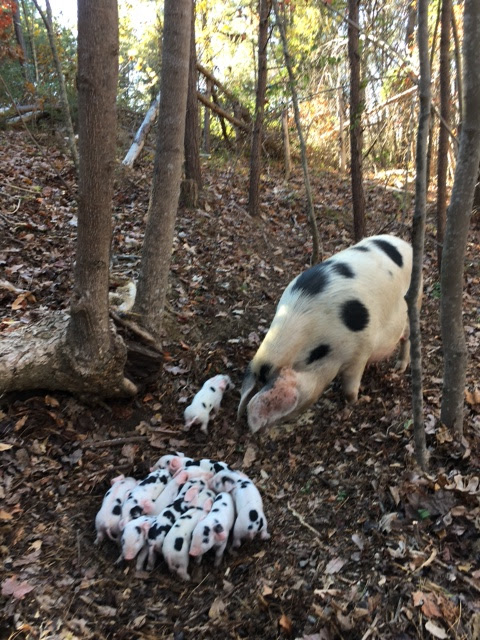