A bull in a china shop

Breeding time can be fun but it can also be a pain in the neck.  Mostly it's the logistics of it all.  Move one animal here and it disrupts the day-to-day flow and routine.  Move another there and someone is unhappy or someone is bred that shouldn't be.  It might not be so bad if I had many paddocks, shelters and waterers, but my field is only divided in two so I have to be creative.

Many of my girl goats got bred early this year because I was trying to coax Raisa in to be milked  and couldn't just hold the barn door open and bribe her.  If I did that all the other animals would have come in and raided the food, etc.  Instead I moved the girls to the "boys' side" where my buck, Cato, lives.  Cato was very happy with this arrangement.  Eventually Raisa decided it was ok to come in on her own and I didn't have to keep moving girls back and forth.  Fortunately my goats follow me when I call so it's not that hard to move them.

This week Raisa was bellowing for Franklin.  Even though she just had a baby a month ago I thought maybe she was in heat so I moved her to the bulls' side for the day.  It didn't appear she was ready.  I was a little worried about leaving her over there in case her son from last year, Lennon, was mature enough to breed her.  He's only just a year old so hopefully he isn't ready for that.  Yesterday I decided to move Franklin over to the girls' side; Cato too.   This disrupted morning milking.  Franklin truly is a bull in a china shop.  First thing he did was hop into the tiny shed that's built on the chassis of a pop-up camper.  It's only about 6 feet by 11 feet, with a plywood floor and on 2 wheels.  When he stepped in the trailer tipped toward the bumper side.  It leveled itself back out when he walked to the middle.  He ate all the goat minerals and seemed to like being in there. All I heard was clump, clump, clump.  I was hoping he didn't go through the floor.  I didn't know how I'd get him out if that happened. 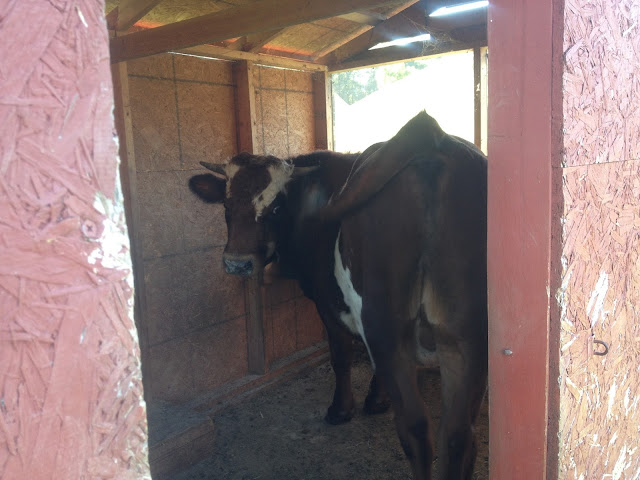 He knocked things over and emptied all but one water bucket.  I don't know how he drank all that water.  One of the waterers is a small paddle boat that holds several gallons.  The goats, dogs and Raisa rarely drink more than 5 to 7 gallons of water from these buckets.  I don't know how he held it all.  There's Cato in the background.  He's a pain too but not as strong and destructive and Franklin. 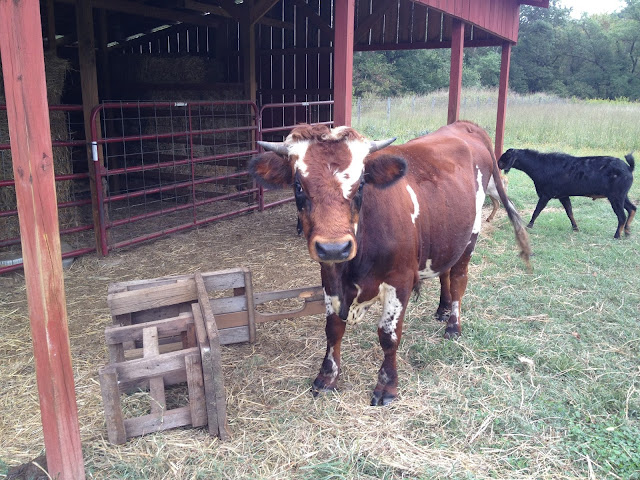 The whole time I was milking Franklin was pushing his head through the window to steal the girls' food.  I had to move their feed bucket to the floor so he couldn't reach it. 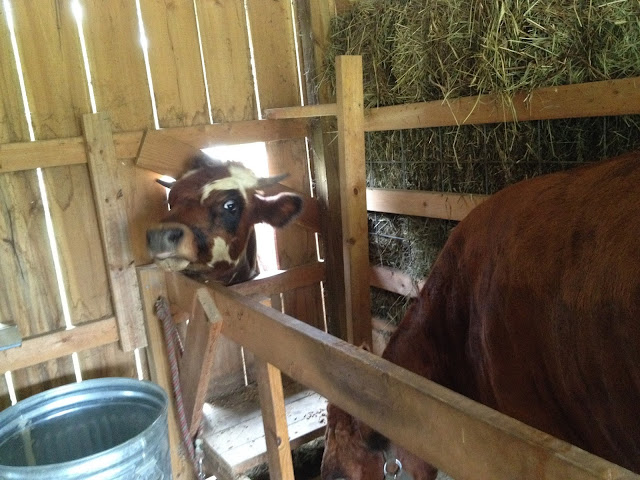 He's as cute as can be and very sweet but he's always right there.  As I was filling the water buckets he was drinking from the hose or licking my hand.  I decided he needed to move back to the other side of the fence and I'd wait till I was sure Raisa was in heat to bring him back or move her over there.  Luckily moving him back was easy.  Most of my animals are tame and follow me.  All I had to do this morning is ask Raisa to come with me and Franklin would follow her.  In the background of this video you can hear Lennon carrying on because he was lonely without Franklin.
Mo also followed along.

As you can probably tell I'm excited about breeding Raisa to Franklin this year.  Next year I'm hoping for an adorable little red Jersey/Dexter heifer.
Posted by kpannabecker and jpannabecker at Wednesday, September 28, 2016