Boy, was I wrong

This morning I emailed a friend, "not much excitement here".  As it turned out, I was very wrong.  My black Friday turned out to be very exciting.  When I went out to feed everyone I discovered Black Olive (my large black sow) gave me a nice surprise, better than anything I could fight the crowds for at a department store; two tiny piglets, a boy and a girl. 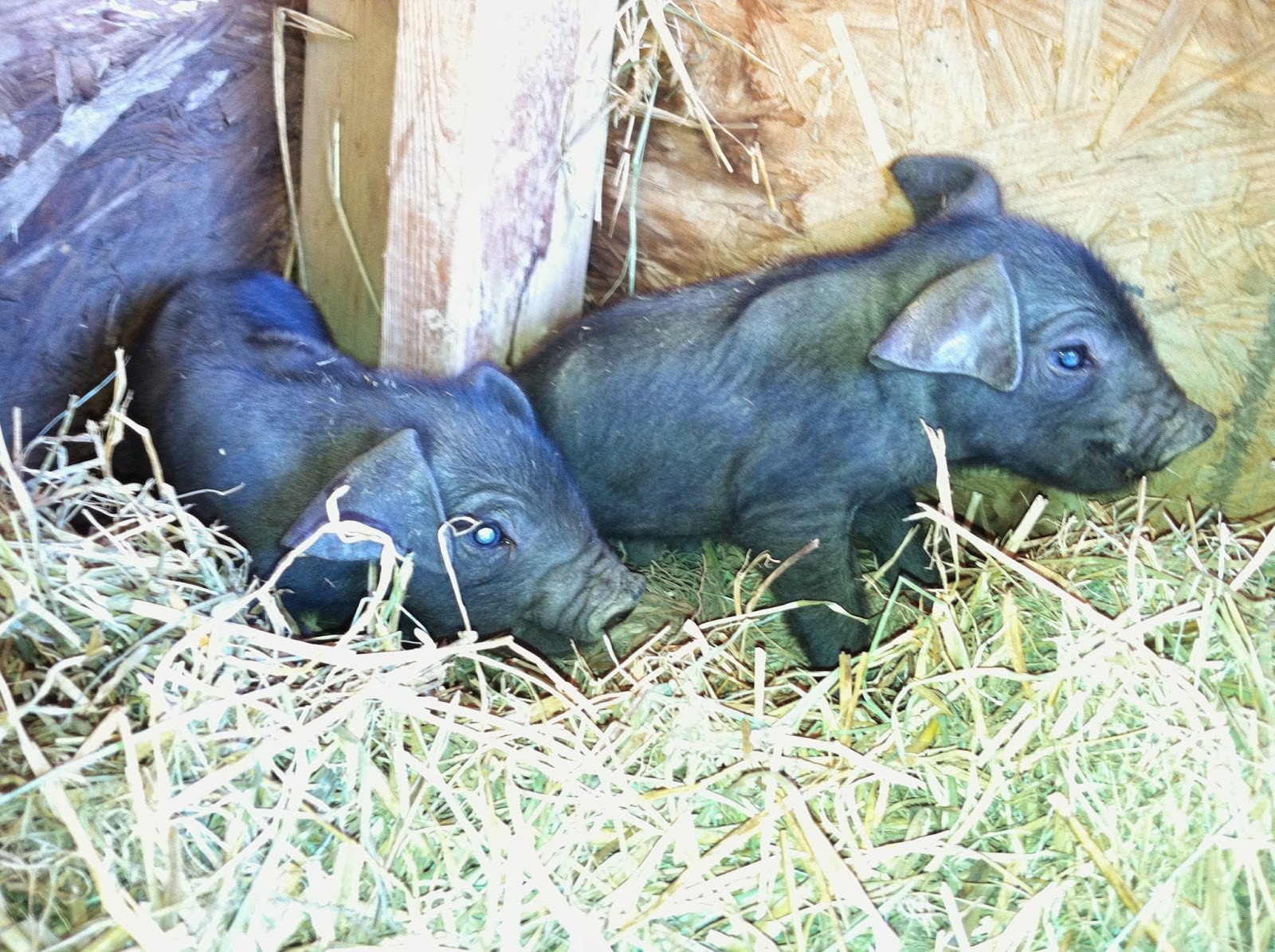 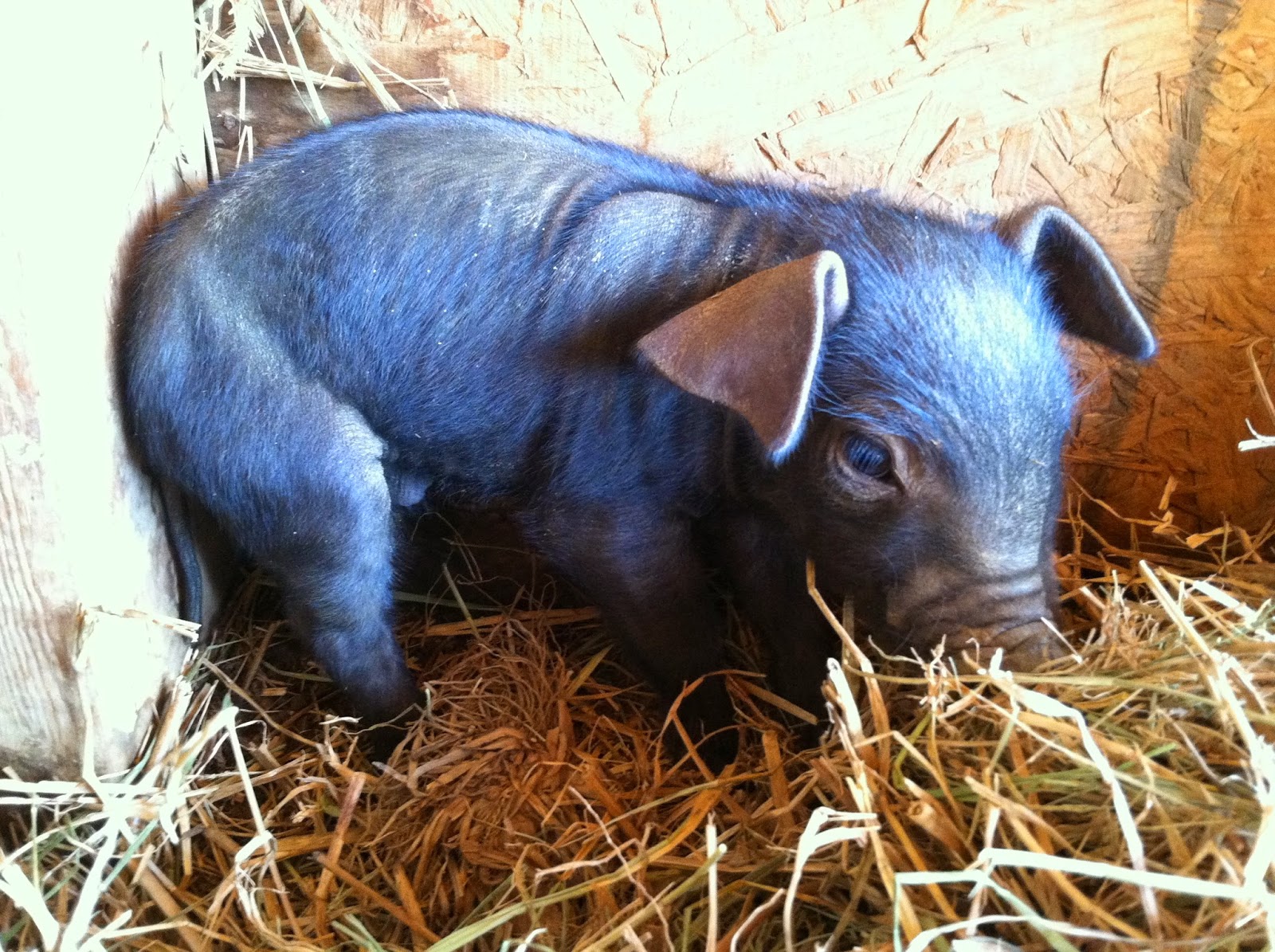 They took naps in my lap for about 30 minutes while their mom was eating.  So far they're not afraid of me.  Piglets usually squeal like crazy when you hold them but these two seem to like the warmth of my hugs.  The other pigs have welcomed them and are pretty gentle around them.  I saw Roxie gathering more straw to put in their pen to keep everyone warm.  Every now and then I think I shouldn't be keeping a non-productive gigantic hog but then I find many excuses to keep Roxie.  She makes all the nests and takes care of everyone.  This afternoon I went to check on them and all 10 pigs were cuddled up in a 7 1/2 X 7 1/2 foot shelter.  It's adorable the way they pack themselves together to keep warm to sleep.  Look how tiny the piglets are next to Roxie. 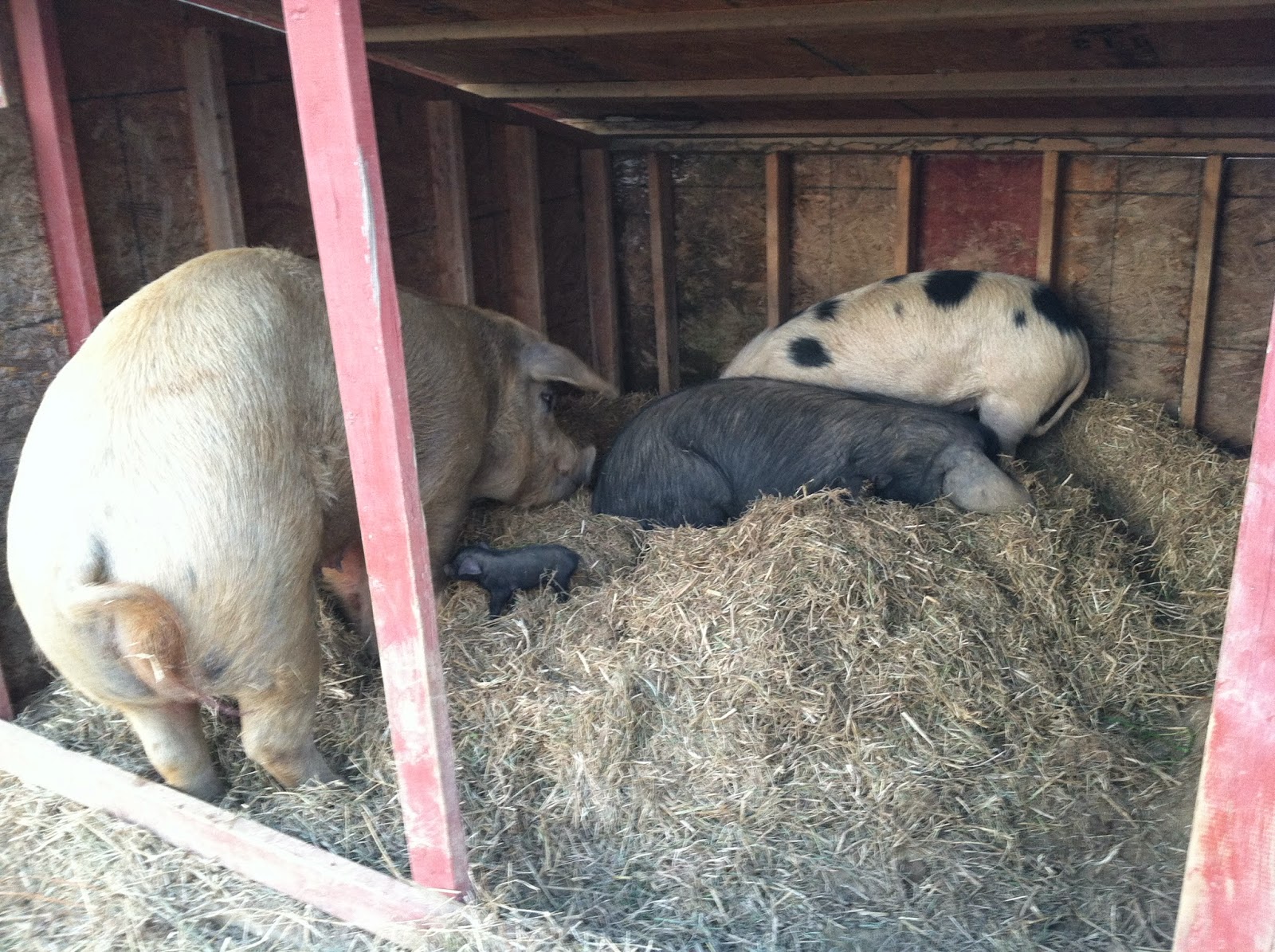 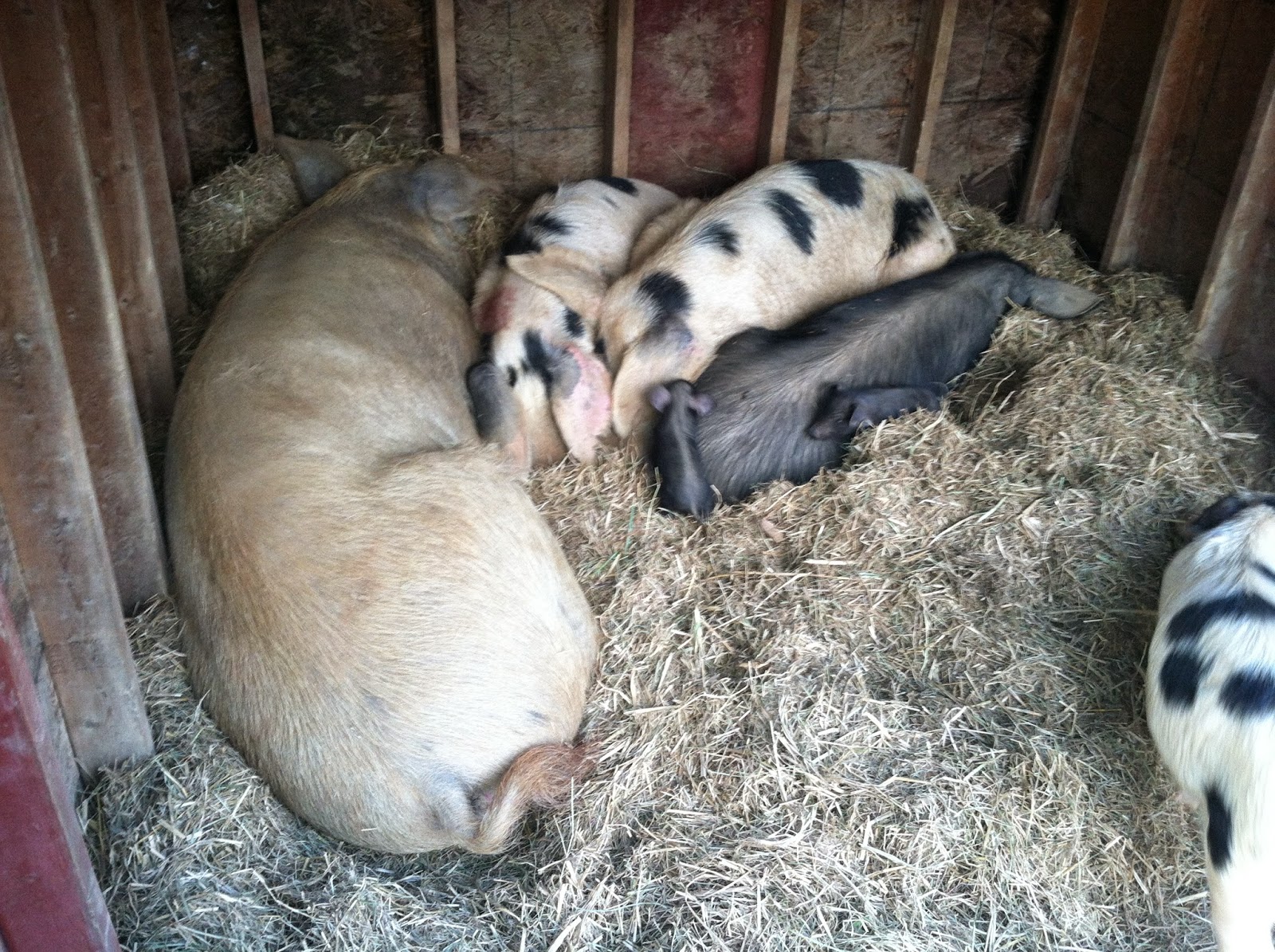 This is 9 pigs.  One is out grazing.  They could probably fit a few more in. 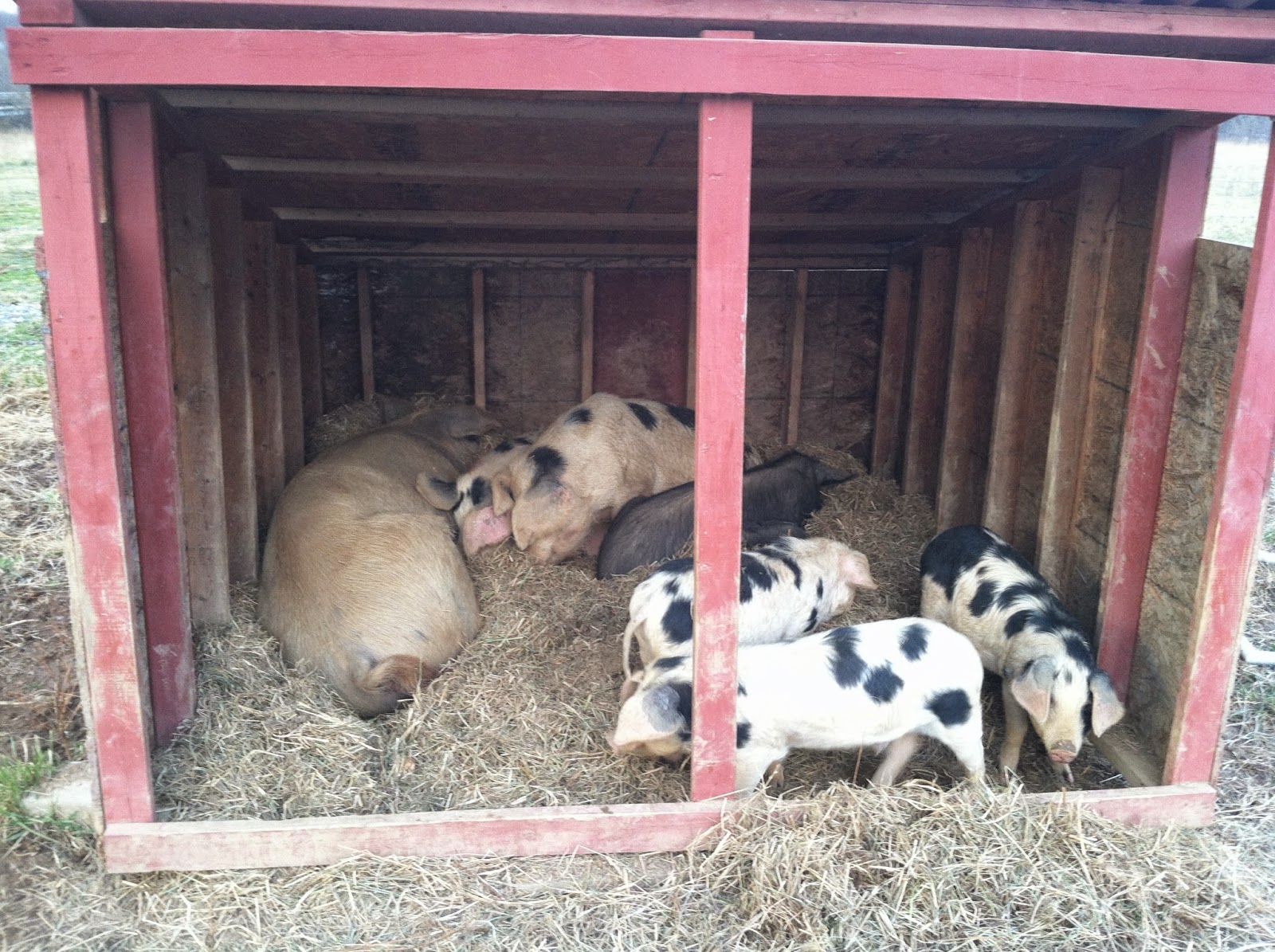 Tell me, is this not the sweetest thing you've ever seen?

Because my goats are ready to be dried up, it's time to separate Windsor from Raisa so we can continue to have milk.  I've been dreading this but Windsor is almost 8 months old so it's time.  Raisa is in heat today so she'll follow me anywhere.  I coaxed her through a gate where the pigs are, hoping Windsor would follow her.  My plan was to get her to go through first, knowing he wouldn't.  Then tomorrow coax her back through the gate and not let him through.  Well, he didn't want to follow.  Everyone else did.  The donkeys thought they were missing out on something.

Later I let the donkeys through and Windsor followed.  Now they're exploring new territory.  I hope tomorrow I can get Raisa back to the side of the field where I can milk her.  I have no idea how much milk Windsor has been taking.  I'm kind of excited.

The neighbors' horses were interested in the cows and donkeys now that they can see them better. 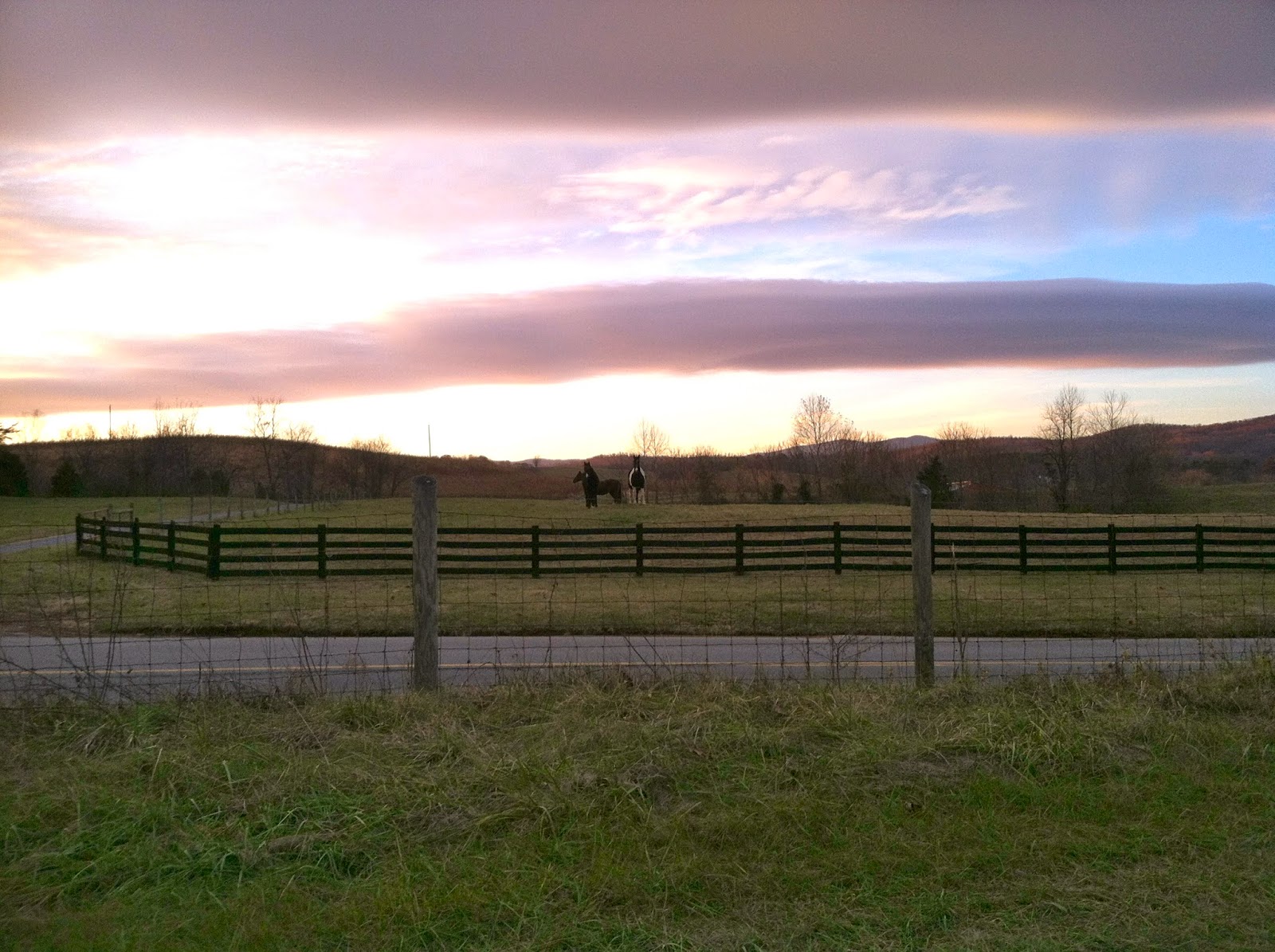 It was a pretty afternoon.  Ignore the traffic noise and power lines.  You'd think we live in the city from the sounds of it but that was just 2 cars with one obnoxious driver trying to impress someone.

It turned out to be a pretty exciting day afterall.