Lots of changes have been made on the farm in the last few days.  Yesterday we relocated animals.  The pigs moved to James' field garden to clean things up.  They should be very happy there for awhile.  When I last visited them Roxie was eating mangel beats we'd left and some fingerling sweet potatoes.  There's also lots of old corn James didn't pick and corn stalks.  We put the stock trailer in the garden for their shelter like we did last year.  I'm sure Roxie will make a nest in it very soon.
It's funny how animals don't like to leave what's familiar, even though they move to someplace I think is better.  We couldn't get Wendell to cross over the electric ribbon we had laid on the ground.  Roxie and Mickey walked over it and we walked them one by one to their new home.  Wendell would accidently cross over it (or James lifted him over it) and he'd jump right back in.  It made no sense and was funny for a while but then got frustrating.  Eventually food won him over and he followed the bucket to find Roxie and Mickey already setting up house.

I felt kind of bad about moving them because Roxie had continued to work so hard to fill their other house with grass.  It was so full there was just a small space behind the grass and I can't imagine how 3 pigs could get in there.  Maybe that was the point; she didn't want the little pigs in there with her.  This picture doesn't do it justice. 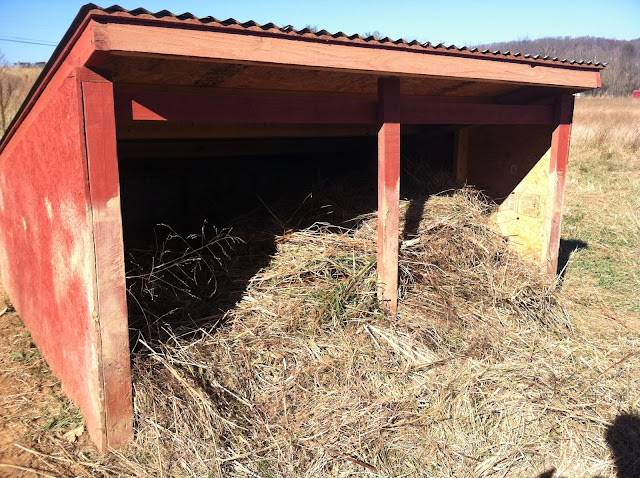 I emptied a good deal of the grass to make room for goats to use it.  That was another change.  I moved the girl goats and Keri across the road to the field.  They were pretty happy about that during the day but I don't know how they feel about it at night.  When I went over there to put the chickens to bed all the goats were waiting at the gate.  They have 3 houses to choose from but I bet they choose the one closest to the gate which has no comfy hay in it.    I love that they follow Keri everywhere.  I'm sure they're all close by her tonight.

They'll get used to being over there eventually.  They've eaten most of the grass in the yard close to the house so now they have way more to eat in the field and their old pasture will have time to recover.  I may do some re-seeding too.

Keri seems to be very happy in the field.  She loves to run and dig for groundshogs and moles so she'll be very busy.  She's a great guardian dog and I don't worry at all about the goats over there.  I'm very proud of how she's taken to her job.